New figures released this week show that residential rooftop solar installations within the US set a record in Q2 of this year. Findings released by GTM Research and the Solar Energy Industry Association (SEIA),  show that Q2 saw a record number of rooftop installations, beating out what was set in Q1. With 1,393MW of PV in Q2, the US has now surpassed 20GW of solar power.

The report revealed several key figures that indicate a favorable attitude toward residential solar systems within the United State. Some notable numbers include: 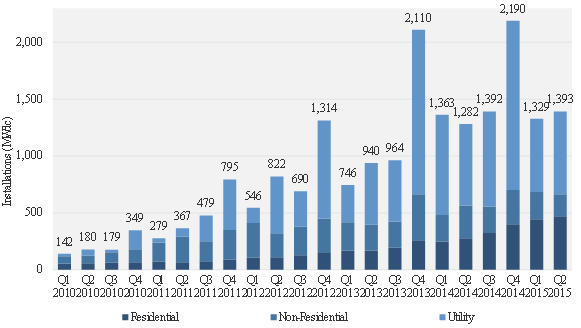 Passing the 20GW mark, SEIA president and CEO Rhone Resch said that there is now enough solar power to light up 4.6 million US homes, which also reduces carbon emissions by more than 25 million metric tons per year.

Another item of note is the geographic diversity that is related to the solar sector. Greentech Media pointed out that ten states each installed more than ten MW of power in the second quarter, indicating a growing interest and support across the nation.

Many sources have pointed the continual growth of installations, especially in the residential sector, to the near-expiration of the federal solar Investment Tax Credit (ITC) at the end of 2016. SEIA has been actively calling for the expansion of the ITC, which is described by the SEIA as a “vital” component to the health of the solar industry. Visiting the SEIA site will allow visitors to make a contribution toward their mission to expand the ITC.